Training to Swim in Darkness 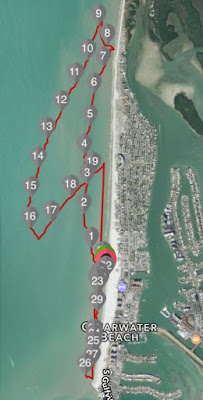 Erin O'Leary of Jacksonville, Florida traveled 4 hours south and across the state to Clearwater Beach for a 6 hour training swim on Saturday morning, March 10, 2017.  She's a seasoned open water swimmer, and she has signed up for an attempt to swim the 20 miles from Catalina Island to the mainland of California.  The Catalina Swim is one of the jewels of the "Triple Crown of Open Water Swimming," and the most challenging part is that the swim is done almost completely at night.  Swimmers board their support craft in Long Beach around 8pm, motor over to Catalina, and then jump off a perfectly good boat and into Pacific waters sometime around midnight.

When Erin arrived at the starting point at Clearwater Beach, it was 3:45am.  I let her know beforehand that we may have one or two other swimmers show up and we were surprised that all of our other local Catalina aspirants were there to train alongside.  Ian Tarrant, Maureen Montgomery, and Serbo Simeoni also have plans to swim Catalina this September, and their presence was invaluable.  For a swimmer training in darkness for the first time, swimming alone allows the mind to wonder and fear can become a major factor.  But the pod of 4 swimmers set off together at 4:22am, without hesitation, into the dark 70F waters of the Gulf of Mexico.

The full moon was setting and the wind was kicking up a 1-2 foot chop as we all headed north for the first 2 hour segment. Erin's stroke count held steady at 58 spm, and she showed no fear at any point, even when one of the other swimmers would occasionally bump her.

Serbo was the first to break away and swim by himself, just before sunrise.  Then Maureen and Ian paired off and swam together at daylight.  So Erin completed the rest of the 6 hour training on her own, never complaining, and steadily advancing with the same stroke count the whole time.


Posted by roncollins at 8:55 PM No comments:


Sunrises are spectacular next to the pool at this time of year.   Here's Judge Beach looking over Tampa Bay yesterday, January 18, 2017.

After yesterday's 5700 scy workout that included 7 x 400's, today I had to leave workout early.  So I decided to take advantage of the longer intervals and concentrated on Butterfly this morning.  I've signed up for a swim meet next month, so I am preparing for 200 fly, 400 IM, 100 fly, and some sprints.


Posted by roncollins at 8:57 AM No comments:


40 years ago, swimmers we beginning to use more equipment during training.  When I first joined a swim team in 1973, I remember that some people didn't even use goggles.  Nowadays, there are many options for eye wear, hand paddles, drag suits, fins, kick boards, pulley and stretchband resistance systems etc.

I am feeling about 90% strength and fitness, after having shoulder surgery 11 months ago.  Weight lifting has helped recovery, and so has training 6 days per week.  Lately, I have been able to swim a decent 50 butterfly and can hold OK intervals when doing freestyle sets with hand paddles.


Posted by roncollins at 9:30 AM No comments: